Art of the Story: Narrative Paintings 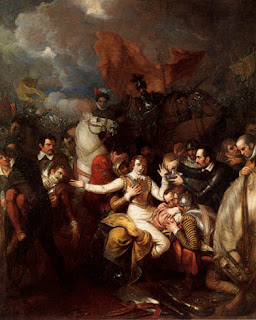 Narrative paintings tell stories drawn from history, mythology, literature, allegory, and everyday life. Narrative paintings are as old as art itself and often involve complex figurative arrangements that make apparent to the viewer the particular story to be told or virtue to be illustrated. Come see and investigate narrative works from Woodmere’s permanent collection in this modest tribute to some masters of storytelling. Some of the artists included are: Benjamin West, N.C. and Wyeth, Frederick James. 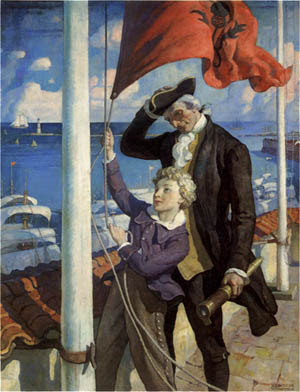 Narrative art is art that tells a story. Much of Western art has been narrative, depicting stories from religion, myth and legend, history and literature. To tell a story, to describe an action, to create memorable characters and recall legendary events was once for painters one of the fundamental tasks to which the artistic imagination addressed itself.

Narrative paintings that describe important events or subject matter from the Bible or classical mythology were termed History Painting by French Royal Academy in the seventeenth century. Intended to describe the most important type of painting, history painting was at the top while the other types of paintings in descending order were portrait, genre (scenes of everyday life), landscape, and still life. By the end of the eighteenth century, modern historical subjects were introduced by artists like Benjamin West. He brought a new theme to narrative painting – an introduction of contemporary events into the acceptable repertoire of history painting.

Popular from about the seventeenth century are narrative paintings or genre paintings that show scenes of everyday life. These works often involve complex figurative arrangements that make apparent the particular story to be told or virtue to be illustrated. The work, Fair Near Strasbourg-Alsace by Christian Schussele is a good example.

In modern art, formalist ideas frowned upon the narrative in artwork. However, coded references to political or social issues or to events in the artist's life are commonplace in modern art. Such works are effectively modern allegories, and generally require information from the artist to be fully understood. Representing this approach to narrative are works of Sidney Goodman and Allan Freelon.

On view are works from Woodmere’s Permanent Collection which reflect examples of all these styles of narrative, including: the history paintings of Benjamin West and Johann Geyer, the modern allegories of Sidney Goodman and Allan Freelon, the personal narratives of Sarah McEneaney, and the genre paintings of Frederick James. Present in all these narrative works are the implication of action. Something has just happened or is about to happen. The scenes presented are frozen in time, with the viewer challenged to piece the story together from carefully constructed compositions. It is the pleasurable discovery of the story and the skill with which the narratives are visually illustrated that make these works
so satisfying.