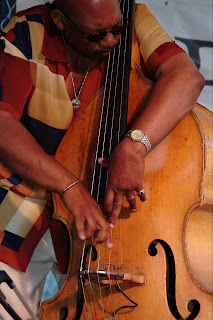 April 8 – 29, 2011
Woodmere celebrates Jazz Appreciation Month on Fridays in April with music, food, drink, and children’s programming. These programs are offered in conjunction with PIFA and in partnership with Lifeline Music Coalition, Inc.

Friday, April 8
Paris Nightlife, 7:00–9:00 p.m.
$20 ($15 members)
Visitors can travel back to turn-of-the-century Paris as Woodmere is transformed into an intimate and informal cabaret with cozy tables, a variety of French wines and cheeses, and performances by the acclaimed Arpeggio Jazz Ensemble.

Friday, April 15
Cole Porter Night, 6:00–8:00 p.m.
$10 ($5 members)
Pianist Reiko Okuda and bass player Warren Oree will play the music of the great American composer Cole Porter. A growing number of American musicians lived and worked in Paris as the city embraced American jazz. Among them was Porter, whose time in the French capital informed much of his later work. Wine and cheese will be served.

Paris for Kids: Story Hour, 6:00–7:00 p.m. (Free)
While the adults listen to the songs of Cole Porter, kids can join in a story hour featuring Bonsoir Lunne (Goodnight Moon) and Madaleine.

Friday, April 22
Seine-suous Strings, 6:00–8:00 p.m.
$10 ($5 members)
This evening features jazz violinist Marina Vishnyakova, who studied as a classical violinist in Russia, and later came to Philadelphia to study under world-renowned jazz violinist John Blake, Jr. at the University of the Arts. Wine and cheese will be served.

Paris for Kids: Circus Creatures, 6:00–7:00 p.m. (Free)
Kids can make their own circus creatures inspired by the work of artist Alexander Calder, while parents enjoy music, wine and cheese.

Friday, April 29
Django Night, 6:00–8:00 p.m.
$10 ($5 members)
Jazz guitarist David Joel celebrates the music of Django Reinhardt. Born in Belgium, Reinhardt grew up near Paris. He went on to invent a new style of jazz guitar and be- came a pioneering composer who influenced many other musicians. Wine and cheese will be served.