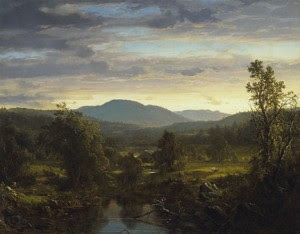 Frederic Edwin Church was perhaps the best-known representative of the Hudson River School of landscape painting. Born in Hartford in 1826, he was the privileged son of Joseph Church, a jeweler and banker of that city, who interceded with Connecticut scion and collector Daniel Wadsworth to persuade the landscape painter Thomas Cole to accept his son as a pupil. From 1844 to 1846, Church studied with Cole in his Catskill, New York, studio and accompanied him on sketching sojourns in the Catskill Mountains and the Berkshires of Massachusetts. At one point, the master characterized the student as having "the finest eye for drawing in the world."


Following his term with Cole, Church established a studio in New York City and quickly seized a reputation, less for the allegorical landscapes that had distinguished Cole's output, than for expansive New York and New England views that synthesized sketches of varying locales into vivid compositions. In 1857, however, Church leapt to nationwide and even international prominence with his seven-foot-wide picture Niagara (Corcoran Gallery of Art, Washington, D.C.), which stunned spectators in New York and in Great Britain (where it was shown in 1857 and 1858) with its combination of breadth and uncanny verisimilitude.

Posted by Woodmere Art Museum at 10:24 AM