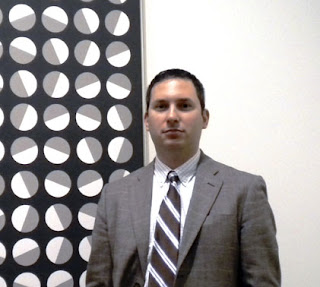 Woodmere Art Museum welcomes Matthew J. Palczynski as its new curator. Palczynski, who most recently held the position of Staff Lecturer for Western Art at the Philadelphia Museum of Art, received his Ph.D. from Temple University’s Tyler School of Art with a dissertation on the Abstract Expressionist painter Mark Rothko. He specializes in art of the 20th and 21st centuries, and continues to teach courses in relation to this period at Tyler.

“We had over 80 candidates for the position,” says William R. Valerio, the Patricia Van Burgh Allison Director and CEO of Woodmere Art Museum, “and Matt was the best fit for Woodmere. His superlative credentials as an art historian, coupled with his experience in museum education will support Woodmere’s commitment to making connections between our visitors and our great collections of the art of Philadelphia.”

“This is a city with a long history of art and a thriving art scene,” says Palczynski. “More and more young artists are choosing to live and work in Philadelphia, and I am thrilled to be part of an institution that is dedicated specifically to exploring and interpreting this new vitality. At the same time, there are so many established artists in the region, and I look forward to giving these artists the greater attention they deserve.”

Palczynski will oversee the Chestnut Hill institution’s collection, which spans four centuries of Philadelphia art, representing a living history of Philadelphia’s artists, past and present. Much of Woodmere’s collection is now available online at the newly launched woodmerecollection.org. The collections database offers an interactive forum where ideas, knowledge and stories can be shared.

Continually adding to its collection, Woodmere is also pleased to announce the acquisition of Woman with Red Hair, a stunning Modernist portrait by American painter Arthur B. Carles (1882 – 1952). This is the second Carles acquisition for the Museum, which added Abstract Bouquet to its collection last fall, when it was featured in the exhibition Mary G.L. Hood and Philadelphia Modernism. Born in Philadelphia, Carles also spent time in Paris, where he developed a European Avant Garde style influenced by the painterly school of Fauvism and the work of Henri Matisse. Woman with Red Hair, believed to have been painted in Paris in 1922, is an excellent example of Carles’ interest in color play — his use of green and purple in his model’s skin tone becomes striking against the dominating vibrant red palette.

“Woman with Red Hair is the most sensual, sensuously painted and fully developed portrait Carles painted of his French red-headed model Angele,” says art historian Barbara Wolanin. “Rather than flattening the figure into an abstract composition, Carles artfully caught his model’s features in near-profile, showing her drape sliding suggestively off her shoulder. I am delighted that Woman with Red Hair is now part of Woodmere Art Museum, where the public will be able to share Carles’ delight in his model and in capturing her with color.”

The painting, a gift of Linda and James Ries in memory of Rose Ries in 2011, was exhibited at Woodmere in 2000 and has also been shown at the Pennsylvania Academy of the Fine Arts. Woodmere owns a print by Carles of the same model, given to the collection by June and Perry Ottenberg. Carles lived and worked in his home on Evergreen Avenue in Chestnut Hill. “This is a wonderfully sensual painting that expands Woodmere’s ability to tell the story of Philadelphia art,” says Valerio. “This is a major work of art.”
Posted by Woodmere Art Museum at 9:46 AM