Building the House of Wisdom: A Closer Look at Violet Oakley 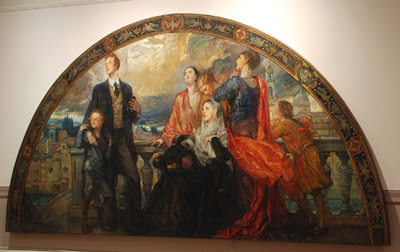 In 1911, Violet Oakley (1874 – 1961) created a mural cycle, The Building of the House of Wisdom, for the central hall of the mansion of Charlton Yarnall at 17th and Locust Streets in Philadelphia. The murals were painted on canvas shapes that were inserted into the architectural structure.
When the Yarnall House was remodeled in the early 1970s, the murals were rescued and brought to Woodmere by Edith Emerson, the Museum’s first director and Oakley’s partner. Unfortunately, the cut glass dome that Oakley designed to crown the hall was destroyed.
Three massive, semi-circular lunettes represent the ages of man from childhood through youth and maturity. Six octagonal panels were set into the arches over the lunettes, and they tell the stories of The Life of Hercules and American Invention. Pendentives, which connected the lunettes to the dome, show the advance of architecture through the ages. One of the four pendentives was not taken by Emerson back to Woodmere.
The Building of the House of Wisdom is a metaphor from the Old Testament’s Book of Proverbs that describes how an individual can achieve health, wealth, and harmony with the world. Oakley believed that artists should communicate universal truths, and she sought to apply the humanistic ideals of the Italian Renaissance to modern life. She created The Building of the House of Wisdom after spending time in Rome and drew upon the lofty models of Michelangelo’s Sistine Chapel and Raphael’s Stanze.
This Spring 2011 exhibition was the first time The Building of the House of Wisdom had been exhibited in its entirety after being conserved in 2007 by Woodmere, thanks to a grant from the William Penn Foundation. This exhibition will be on display again September 25, 2011.

The first lunette is called The Child and Tradition. At its center, seated on the knees of two powerful women, a small child symbolizes mankind in its infancy. Situated between the two archetypal female presences of mother and nurse, the child is safe to dream about the great figures of history and literature to which they have introduced him. In his imagination, historical luminaries populate the stairway of his home: Confucius, the author of the Analects (lower left); Solomon, the author of the Book of Proverbs, holding a chest of treasure (left); Cicero (lower right); and Dante, preceded by his courtly, idealized love, Beatrice (right). The scene takes place in a stairwell made using post and lintel construction, the first architectural doorway. The child must climb the stairs to reach the next level of maturity, symbolized in the lunette Youth and the Arts. 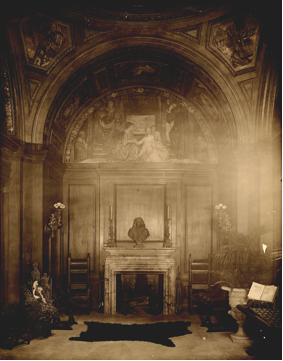 
Stay tuned. More information about this exhibition and the Violet Oakley paintings in our Permanent Collection will be posted on our blog after September 25, 2011.
Posted by Woodmere Art Museum at 8:44 AM